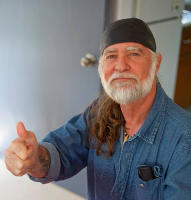 David Dahr is the author of Protection in a Handbook, the book to help homeowners understand liability issues and make sure their property is a safe worksite when doing home renovations. He is also the inventor of the Genesis Safety System, a lightweight and astoundingly flexible replacement for traditional scaffolding that has superior safety qualities.

By trade, David is a carpenter who has over the years worked in several positions within his trade. David has been a trainer for the carpenter's union, and consulted on safety issues with Dalhousie University and the Government of Nova Scotia. Keep reading to learn how a carpenter just doing his trade came to write a book and invent a safety system.

The beginning of David's journey

It has taken David Dahr many years to know what he now knows to be able to write Protection in a Handbook - and he is still learning. He has been a carpenter for thirty years and obtained his knowledge by actually performing the work on the job.

Over the years, David has progressed from being a carpenter, to a carpenter's foreman, to a site supervisor. During the past several years, he has been actively involved in workplace safety within the construction industry. He is also the inventor of the Genesis Safety System, a fall protection system that has not only been proven to be effective in the construction industry, but has been certified for use in several juristictions around the world by Innova Corporation. Other certifications include Construction Safety Supervisor, Principal of Loss Control Audit Provider, Occupational Health and Safety Trainer. He now adds the title of author with this timely publication of Protection in a Handbook a homeowner's guide to workplace safety, responsibility and liability.

In his early years as a carpenter, quality of workmanship was considered the most important aspect of his job, not safety. After the Westray incident (a Nova Scotia mine workplace tragedy) that all changed. That tragedy prompted the federal government to change the criminal code (See Bill C-45 Plain Language Guide) to include workplace responsibility and triggered the government of Nova Scotia to undertake a complete revision of the Occupational Health and Safety Act (OHSA), as well as the regulations under the Act. Each provincial government then began to update their own legislation, which resulted in fairly uniform standards for safety being implemented across the entire country. Today, safety on the job site is as important as the quality of workmanship. They go hand in hand.

It was not until the mid-nineties that David became more aware of the importance of safety in the workplace. However, the extent of his understanding was limited although he was, at that time, employed as a worksite supervisor. Then, a Nova Scotia Department of Labour and Workforce Development safety officer visited his workplace for the first time. The officer informed David that certain procedures had to be followed in order to provide appropriate fall protection for his workers. Although he and his employer were in compliance with the OHSA, David still had a concern for other workers in the residential construction industry. The difference was that now everyone had to do his or her job within the regulations of OHSA.

After reviewing the Fall Protection and Scaffolding Regulations, David found there were some gaps in the regulations that pertained to fall protection, especially with respect to the availability of certified products that met the requirements for residential construction. It was only then that he realized that the construction industry had a more serious problem.

One restless night, unable to sleep, patterns danced in his head. Instead of fighting with those thoughts, he decided to put these patterns on paper. That was a turning point in his life, as he really began to internalize the importance of workplace safety and subsequently started to research the requirements to develop a safer product for fall protection within the construction industry in Canada, indeed, for the world.

The question was, "Who certifies scaffolding in Canada?"

To find the answers to this question, David approached the director of the Nova Scotia Department of Labour and Workforce Development (NSDLWD), the director of the Nova Scotia Construction Safety Association (NSCSA), and the Prevention and Consulting Department of the Workers' Compensation Board (WCB). That question and many answers later ultimately led to the development of the Genesis Safety System for the construction industry and planted the seeds for the writing of Protection in a Handbook for homeowners, who are likely the least informed of all those potentially affected by laws relating to safety and accident prevention. The information in this book should be well known by all those who work in, or are associated with, the construction industry. However, most homeowners who may well assume the role of a contractor or constructor when work is being done on their properties, it is, for the most part, unknown.

This website would not have been possible without the inspiration, support and a few introductions courtesy of Frank Janowitz

Over the years Frank served in the armed forces, was a fire-fighter, and a part of the labour movement among other things. He was always supportive of safety efforts, but even more so of his friends and even acquaintances. Frank passed away in 2010 so we thought it remiss to not mention him since we cannot thank him in person. He continues to be missed.